Part III: The Union of Marijuana and Alcohol: How Consumers are Using Recreational Cannabis with Adult Beverages. Ask Amy!

Anecdotal evidence suggests younger cohorts are being pulled away from alcohol, in favor of recreational cannabis. Factors such as “bang for the buck” (relative to alcohol), increasing accessibility, varied product options, and fewer adverse side effects can be powerful draws for a generation known to seek experiences with an emphasis on ethical and natural consumption practices.

While recreational cannabis users are freely consuming alongside alcohol, it is not totally without concern. A majority (nearly 4 in 5) expressed moderate to extreme caution when consuming cannabis and alcohol during the same occasion. Few reported being not at all or only slightly concerned (22%). 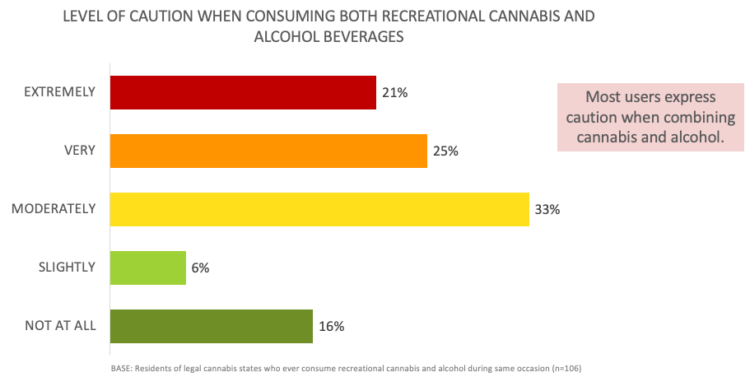 Recently, Scientific American reported that those who consume cannabis and alcohol are twice as likely to use both at the same time than to imbibe in one or the other.[1] Major global alcohol manufacturers have taken notice and invested billions of dollars into the high-growth cannabis industry.

That’s good news, because a majority of recreational cannabis users in our study (78%) stated they would like to have the legal ability to consume cannabis at a bar or other venue where alcohol is served. Millennials were most likely to respond favorably to such a situation (91%).  This is not to say that such large proportions of users would actually do so, but they certainly would prefer to have the opportunity available.

This collision of worlds has led to a new category of THC-infused beverages typically associated only with alcohol, such as beer and wine. Because of legal restraints, these beverages have been dealcoholized, but are meant to provide consumers the enjoyment of the beverage with the recreational effects of cannabis.  Manufacturers are also working hard to use water-soluble THC, which prevents the undesirable effects typically associated with edibles.

We are observing the real-time evolution of an industry that has gone from criminalization to controversy to one of normalization. While there are still many more legislative and regulatory hills to climb, the speed at which individuals and governments are perceiving cannabis as a normal recreational product and a tax revenue generator is astonishing. And now that manufacturers are exploring novel ways to combine cannabis with other more traditional alcohol products, the normalization is only continuing. The future of the cannabis industry certainly looks bright.

Stay tuned as we release more findings from this research study. Till then, contact us if you’d like to learn more.

Merrill Research – Experience You Can Count On