The Many Faces of Anger

Are You Mad at Me or is That Just Your RBF?

In his groundbreaking tome “The Many Faces of Evil”, Theologian John S. Feinberg depicts several varieties of abomination: moral evil (the evil we perpetrate upon each other), natural evil (natural catastrophes), and religious evil (suffering from disease). While the title of Feinberg’s book is metaphorical, the micro-expression of anger literally has many faces.

Anger can be displayed by many parts of the body—not just the face or eyes. For example., when people are angry, from head to toe—literally.

Why do we get angry? Anger’s purpose can be to signal displeasure, frighten someone, or can precede a physical fight. We can all recognize when someone is angry. We can sense it ourselves; our muscles become tense, our heart rate and breathing increase, blood rushes to the face, and our neck bulges. But, what about more subtle expressions of anger that can often be masked with a smile? My colleagues Kasia and Patryk below are displaying various forms of anger.

The Many Faces of Anger 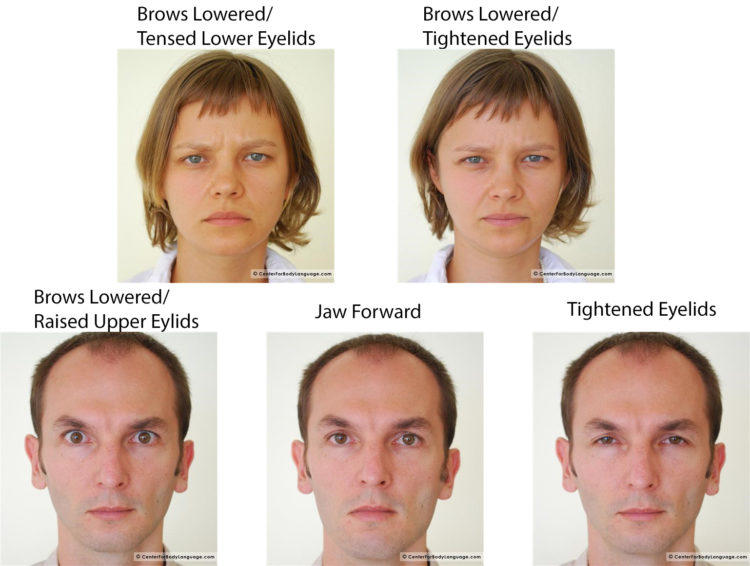 If you don’t see other indications of anger—either with the face, eyes or body—be careful; a lone indicator of anger could be misleading. For example, activity with eyelids and eyes could also mean problems on focusing, with concentration, extremely bright light, very low light, or someone with poor eyesight. A jutting jaw could simply mean someone is chewing gum. Pressed lips can also sometimes be indications of controlled sadness.

Are You Mad at Me?

Angry eyes can pierce but oftentimes we mistake anger for concentration. Remember, micro expressions occur in less than a split second. If someone is looking at you with furrowed, narrow brows for longer than that—they’re likely not angry. They’re likely concentrating. It could also be their RBF[2]. This type of action is what Dr. Eckman calls forms of “communications signals” or “emblems” (there are 60 used in the US today alone and many more outside the US).[3] These emblems differ from micro expressions in two very important ways: 1) first, as previously noted, emblems are expressions longer in duration; and 2) with a few exceptions, we can control them. Writes Eckman, “Emblems are almost always performed deliberately. The person who makes an emblem knows what she is doing. She has chosen to state a message”[4]

What to Do When You Encounter Anger?

We see the micro expressions of anger in the face-to-face research that we conduct—especially in advertising or new product development when respondents see a concept that frustrates them in some way. When you encounter such expressions of anger, try the following:

Stay tuned to our next blog as we individually analyze the micro expressions of fear and how to spot signs of it.