The Micro Expression of Fear

How Fear Can Help You and Paralyze You

“We suffer more in imagination than in reality.” Seneca

A young woman enters an elevator alone late at night when suddenly she spies a man walking toward her. Something about him concerns her, and she is instantly gripped by fear. The hair upon the back of her neck tingles. Her heart races and her breathing quickens. In a split second, she must decide if she will hold the elevator door open for him (a socially kind act) or risk hurting his feelings by allowing the door to shut in his face (trusting her instincts).

Is this the beginning of a gritty crime novel? Hardly. It’s a true story from Gavin deBecker’s seminal book on trepidation, “The Gift of Fear.”[1]  What does this woman do? You’ll need to read deBecker’s book to find out. But one thing is certain; fear can be paralyzing and while instinct is there for a reason, sometimes fear is about nothing at all.

In our last blog, we discussed micro expressions of anger. Today we discuss the micro-expression of fear and how to spot its various forms.

The Meaning of Fear

Fear is danger’s warning. If a Rhino is charging you, time to be afraid. That’s real danger. But if you fear getting into a top university, is that rational? I admit it, there are just some things that scare the [expletive deleted] out of me for no real reason. Having a good healthy sense of fear can save your life. Wild animals show fear and deference to a more aggressive and dominating animal. This may ward off an attack. The same with humans. In antiquity, showing fear meant “please do not harm me” and “there is no need to attack me.” Even kittens show fear.

Today, we see people hiding fear by suppressing the reaction altogether or by masking it with another emotion—typically a smile.  Their eyes may also show surprise.

That fear can literally paralyze you is no exaggeration. When people are afraid, you can see all over their body. Hence, the phrase, “gripped by fear.”

My colleagues Kasia and Patryk from the Center for Body Language are showing genuine micro expressions of fear below. Fear can be seen in the eyes with the upper eyelids raised high and can be shown with open and elongated mouths. 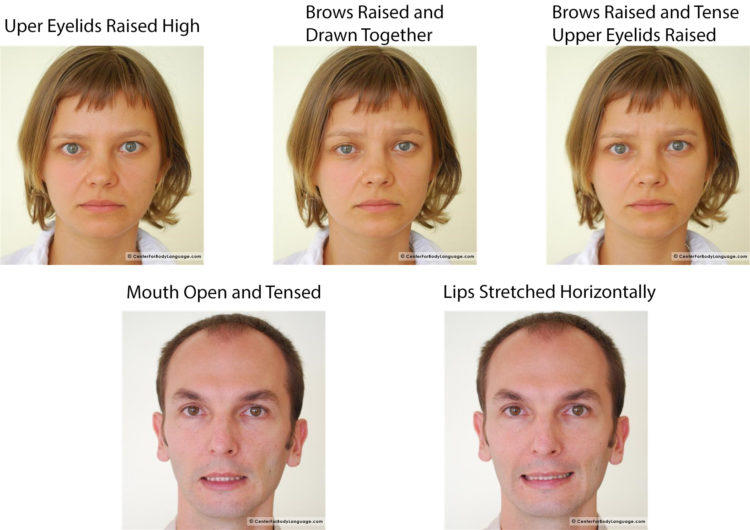 Oftentimes, fear can be mistaken for surprise. For example, when the eyelids are raised very high and held there for some time—that is not surprise. It could be faked surprise, but in most cases, it’s an expression of fear. That fear is often masked with surprise can be seen in some job candidates when they’re afraid to answer a question but want to make a good impression; as a result, they would likely mask their fear with a show of surprise. [3]

What to Do When You Encounter Fear

We see the micro expressions of fear in the face-to-face research that we conduct—especially in our qualitative research when respondents are encouraged to discuss themselves in a group setting or talk about their emotions.

When you encounter expressions of fear, try the following:

As for facing the things that frighten you, get out there and, as Ralph Waldo Emerson said: “Do the thing you fear and the death of fear is certain.”

Stay tuned to our next blog as we individually analyze the micro-expressions of sadness and how to spot signs of it.

[3] The Center for Body Language.